Began pushing again in the heat and met with some city officials. 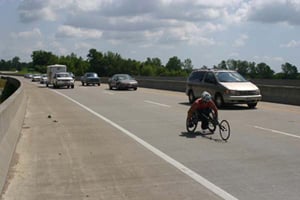 I pushed approximately 24 miles total from Columbia, IL to just past Waterloo, IL. The sun pounded on me from above and the pavement baked me from below.

I met with Mayor Terry Kipping of Waterloo at city hall. Shawn Kennedy the city collector was also at the meeting. The Chief of Police, Joseph “Joe” Brauer was also present. The media present included Danny Kelley reporter from the Republic-Times the Herald and the Shopper from Waterloo, IL. Monroe County Independent Newspaper editor and reporter Ed Wienhoff was also there.

It was a hot and humid day of pushing. I was very hot and soaking with sweat when I showed up to city hall in Waterloo. It was in the 90’s and one of the most humid days this year. I’ll be facing incredible heat, pounding rain, dangerous traffic, and all sorts of unforeseen obstacles on this trip. Even small differences in the terrain, like a five mile uphill haul – makes an enormous difference in effort to a guy in a wheelchair. Whatever happens I’m ready to overcome any adversity I might face. I’ll experience blisters, sunburn, sore muscles and more and it’s all worth it if I can inspire more Americans to get healthy and fit. The fatigue and stress I feel from my effort is comparable in a way to the stresses and fatigue too many Americans get from living unhealthy lifestyles. My trip will take a toll on me physically. The unhealthy choices many Americans make take a huge toll on their lives and when combined it takes a toll on American fitness and health as a whole. It leads to higher healthcare costs, lower productivity at work and general unhappiness and stress at a personal level. I encourage and hope to inspire all Americans to find healthy alternatives to greasy, expensive, fast food and learn to enjoy the benefits in life exercise has to offer. The people I meet on this Revolutions tour give me hope. They are interested in what I am doing and while maybe unsure of how to get started are ready to live healthier lives. I’m going to do all I can to help them every step of the way and with every revolution of my wheels.