Moving Through the Motor City

by Saunders & Associates / Friday, 04 March 2011 / Published in Fitnesss 4 All 50 State Tour
“ The abundant life does not come to those who have had a lot of obstacles removed from their path by others.  It develops from within and is rooted in strong mental and moral fiber.”

Moving Through the Motor City 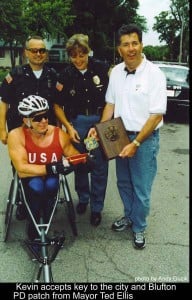 Kevin accepts key to the city in Blufton, MI

In recent years, the buckeye state has gained a reputation and notoriety for being something of a political bellwether.  Presidential candidates fight viciously for votes and opinions here because they know the state’s population – along with its diverse urban and rural areas – make it a good representation of our nation as a whole.

When it comes to fitness, the same ideas apply.  As I pushed from one end of Ohio to another, I found people of all races, beliefs and backgrounds. Each of them had a unique take on the battle for better health in America.

I started with pushing my wheelchair from South Rockford, Mi to Monroe, MI 22.5 miles. I had an interview with WNIC Radio, where we discussed the tour and my fitness initiatives for the nation, then we immediately left for a newspaper interview. Not since my Paralympic and wheelchair racing days had I done so much media but I was glad to get the media attention. I was able to use the skills I learned as a motivational speaker to clearly get my point across. America has an illness due to poor nutrition choice and lack of exercise. We have too many channels on the television and not enough feet hitting the floor getting active. We are couch potatoes and computer zombies.

I have an excuse for sitting all the time,  I’m in a wheelchair! Yet I make sure to stay active and fit. Even in a wheelchair through hard work and God’s help,  I was able to become a world champion athlete. The least that people on their feet can do is actually get on those feet from time to time and move, jump around, play sports, ride bikes, and have fun! The best part of it is that it IS FUN and you will feel better, look better and you can become an inspiration to those around you. After the interview, we met Clint Lowery, and photographer Jon at the Heritage newspaper for an interview in Southgate Michigan. We told the paper our purpose to help America shape up one community at a time. We then continued on toward south Rockwood, Michigan. I pushed through Monroe, Michigan without a police escort. It started to rain near Monroe and half way through Monroe we met a reporter and a photographer from the Monroe Evening News. The reporters name was Valerie Tobias. Monroe, Michigan is Custer’s home town and we passed his monument as we pushed through. It started pouring rain after we passed Custer’s monument. For a while I thought I might need a snorkel! 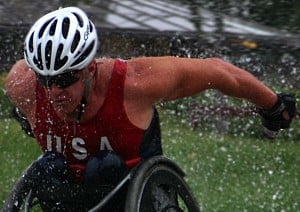 Kevin pushing through the drenching rain

I pushed my wheelchair 29 miles from Monroe, MI through Erie, MI than on to Toledo, Ohio. The rain subsided after we left Monroe and it turned into a bright beautiful sun shiny day. With a little inspirational faith, my prayers were answered and I was given a break! We took a rest after Monroe and then pushed on to Toledo. I pushed on down highway 125 into Erie and then we took Summit into Toledo. We went to meet the media at Lagrange and Summit, but the media was not there, so I pushed on and the media caught up with us in a parking lot. I guess they had a hard time keeping up with a determined man on wheels.

As a top motivational and inspirational speaker and coach, Kevin Saunders, who is paralyzed from the chest down, shows kids, schools, teachers, and community and state leaders that anyone can get fit. As former Governor of California Arnold Schwarzenegger said, “Kevin’s broken body bears silent testimony as someone who has overcome tremendous adversity to get fit and beckons others to follow.”  Mr. Saunders, a world champion Paralympian and wheelchair athlete, will be carrying his message of health and fitness to thousands of schools across America.  Bob Richards, two-time Olympic Pole Vault Champion, said “One of the most heroic and valiant endeavors in sports I have ever seen is the effort and struggle of Kevin Saunders. I am inspired by his message in There’s Always A Way. He is not a dependent in this world but a thrilling contributor to this world…”

One Man, One Mission, One Push Across America

Arkansas – “The Natural State” – Beating the Fitness Crisis in America one Push, one Community at a Time!