Pushed 47 miles from Yoder, IN to Portland, IN 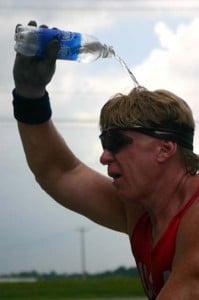 6:00 a.m. CST – My day started in Yoder, IN.  The weather was in the high 70’s and it was partly cloudy.  When we crossed Hwy 225, my support team called the Bluffton, IN police and newspaper so we could do an interview and get police support as we drove through.  It was especially inspirational because the police officer, Greg Steele, had personally biked from Indianapolis to Washington, DC to benefit the fallen police officers of 9/11 so he could relate to what I was currently undertaking.  In fact, Officer Steele helped pace me at speeds between 15 to 20 mph through Bluffton. That’s a good speed on a regular bike and I was using my arms in a wheelchair!  He led me by the police department and mayor’s office where I met Capt. Tammy Schaffer and Mayor Ted Ellis.  I received a police patch from the Bluffton PD and a key to the city from Mayor Ted Ellis.  Receiving recognition for the Tour’s mission always gets me pumped with adrenaline. It reminds me of the excitement I felt competing as a champion wheelchair athlete in the Paralympics.  Thanks to the adrenaline and the fast draft Officer Steele gave me out of town, I was able to wheel 48 miles today.  This gave me an average of over 10 mph.  Over four of those hours were spent in my chair, which is a very difficult thing to do.  I did notice that after four hours of pushing, my neck and right shoulder started to get sore.  I also noticed when I stay in my racer that long pushing, it is necessary to consume plenty of water and Gatorade to replenish my electrolytes and prevent dehydration.  However hard it gets I know I have to keep pushing and never give up! It is important though to be prepared. I have to stay prepared with my medical supplies, my hydration, and be physically prepared for challenges as well. In life we need to be prepared for whatever comes at us. As a motivational coach and inspirational speaker I travel a lot and have to overcome adversity that often is unexpected. For me, even a simple airline flight can be trouble. You can’t let adversity keep you down or stop you from achieving your goals. You just have to stay mentally and physically tough to conquer life’s challenges. So dig deep, find a little spiritual inspiration and you’ll be ready for anything.