Pushed a total of 51 miles from Blue Mound, IL to Litchfield, IL 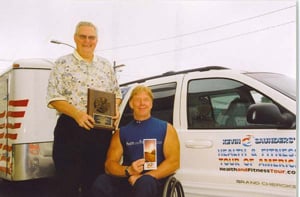 5:00 a.m. CST – I woke up and got things ready to go. We received a donation from Ron Sanderson, a guest at the hotel, that morning during breakfast. Again, I just want to thank everyone who has contributed to this Tour. With their support and enthusiasm, I know the Tour will be a success and that together, we will be able to win the war against obesity.

7:00 p.m. CST – We went back to the Baymont, one of our sponsors, in Litchfield and unloaded all of our gear to get ready for or trek to St. Louis this weekend.

9:00 a.m. CST –  After breakfast, we drove to a meeting with Litchfield’s mayor, Jon Dunkirk Jr. We presented the mayor with a plaque and did an interview with the media present. Everyone was very nice and we received a warm welcome. Unfortunately, right after the presentation we had to leave immediately to catch up on the miles from where we left of the day before.

3:00 p.m. CST – Due to some mechanical problems, I had to move from my hand cycle to my racer for the remaining four miles into Taylorsville.  The hand bike is usually a little easier than the racer, but today it was two or three times more difficult. Encountering this type of difficulty made me reflect on how hard it is for some people to get in shape who don’t put out the appropriate effort.  Because I was tired the night before and I didn’t want to check my bike, I paid the price the next day.  As a motivational coach and inspirational speaker I try to instill the need for discipline and never giving up in my audience. While training to be a Paralympian I knew I had to be prepared for anything, overcoming any adversity that might appear. Sometimes we get a little lax and get caught unprepared. That’s when we need to learn from the experience and make the effort to improve every day and never give up.

As we continued through Taylorsville on towards Litchfield, I noticed that some of the drivers were a little more careless. I guess it was because it was a holiday weekend. Regardless, we had to be much more cautious.

Have a great holiday weekend!