Today I pushed 40 miles from Portland, IN to Hagerstown, IN 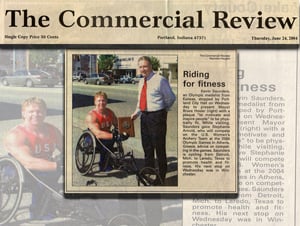 8 a.m. CST- Today was great because I was able to meet with many different people.  While I was in Portland, I presented Mayor Hozier a plaque from the Kevin Saunders’ Health and Fitness Tour of America.  Stephanie Arnold, assistant to Mayor Hozier, was another one of the interesting people I met today.  She is on the 2004 Olympic Women’s Archery Team that will be competing in Athens, Greece.  We wished her good luck and told her to bring back the Gold.  I also spoke with The Portland Commercial Review, Jay County’s daily newspaper.  They interviewed me about my history and the mission of the Tour.  I explained how I had overcome the tragedy I faced years ago to achieve goals I never thought were possible. I overcame adversity and found the motivation and inspiration to live my dream.  My current dream is to help Americans fight obesity by supplying them with the motivation and the knowledge they need to be successful in that fight. My book, “Revolutions”, will cover my methods and plan to achieve that goal.  We also talked about my motivational coaching & inspirational speaking career and how I used that platform to get my message across.  New Castle, IN.  I pushed two morning sessions, 20 miles each, with a little less than an hour break between. I pushed through Farmland, Modoc, and into Hagerstown. Then I had to get in the follow vehicle to get to New Castle in time for my 1:30 p.m. interview. Indianapolis, IN that afternoon, I got back in the van and we quickly drove to Indianapolis. Hagerstown to Indianapolis. But hey, I don’t let it keep me down. I’ll just keep rolling on spreading my message of health and fitness to everyone that will listen.

I also met the police chief and some of the officers.  One officer, Officer Mark, led me through town and then out toward

1:25 p.m. CST – A couple of blocks away from the Courier Times newspaper office, I got out of the follow vehicle and pushed to my interview. They interviewed me and took pictures for about 15 minutes.  Because we had an appointment to meet the media at the Baymont in

4:30 p.m. CST – We arrived at the Baymont with time to spare; however, no media showed.  When a meeting falls through, it is disappointing for many reasons.  The main one is that I get so excited at the chance to reach out and deliver my message to new individuals, it is such a let down if I am unable to do that.  Also, I cut my interview short and lost pushing time by hurrying to meet the media.  So now, tomorrow, I have to back track to make up the mileage I lost from