Talking Fitness & Nutrition Where else but Johnny Appleseed Memorial Park

by Saunders & Associates / Wednesday, 09 March 2011 / Published in Health and Fitness
The mind is not a vessel to be filled, but a fire to be ignited.

Media Madness in Ft. Wayne, IN

I pushed approximately 10 miles from downtown to the interstate with a police motorcycle escort. We averaged about 17 to 20 mph with the Police leading the way. I went to City Hall and received a proclamation from the Mayor on Friday,  a couple days before and now it’s time to move on to the next city. At the mayor’s office, I gave a health and fitness presentation to the city council member and community leaders which was received very well.

I am in the process of writing two books. I just finished “Conversations in Health” it will be out in August and “Blueprint for Success”. The other is titled “Revolutions” regarding the fitness tour across America and my plan is to get the country back on track to getting fit and helping them set personal fitness goals. My tour across America is providing a lot of inspiration to write about. I get exciting new ideas and meet great people all the time. As a motivational coach and inspirational speaker I stay busy and get to interact on a professional level with lots of people but it’s really nice to just get to talk to folks on the street and get them excited about fitness and proper nutrition. I have noticed that people really like to learn about how fitness and proper nutrition can affect their lifestyle in a positive way.

Side Note on Johnny Appleseed: Johnny Appleseed was a legendary American who planted and supplied apple trees to much of the United States of America. Johnny Appleseed’s dream was for a land where blossoming apple trees were everywhere and no one was hungry. A gentle and kind man, he slept outdoors and walked barefoot around the country planting apple seeds everywhere he went. It is even told that he made his drinking water from snow by melting it with his feet. Johnny was a friend to everyone he met. Indians and settlers — even the animals — liked Johnny Appleseed. His clothes were made from sacks and his hat was a tin pot. He also used his hat for cooking. His favorite book was the Bible. There are many tales about Johnny Appleseed. It is said that once Johnny fell asleep and a rattlesnake tried to bite him, but the fangs would not go into his foot because his skin was as tough as an elephant’s hide. Another tale describes him playing with a bear family. 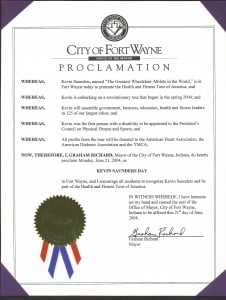 2 P.M. -We got ready and packed to leave for the park next to the city building where we met with Dianne Hoover, the Director of Parks and Recreation in Fort Wayne, IN who read the Proclamation from Mayor Richard. Media present: Ch CBS 15, ABC 21, and NBC 33. The Journal Gazette newspaper and a radio station were also present. All of the media did an excellent job. The awareness of my Revolutions Tour Across America and the need to battle obesity, bad food choices and sedentary lifestyles. We will have a stronger, leaner America by doing whatever it takes! Like my friend Lee Labrada, who is one of the all time great body building champions and like my other friend Arnold Schwarzenegger would say. Lee Labrada’s company Labrada Nutrition, www.Labrada.com, lean body coaching club and lean body contest is focused on helping people get lean and turn fat into muscle. Go to Lee’s site and look for the lean body contest or coaching tips. Who knows you may want to join the contest and see how you can do with the 3 month 12 week challenge and having Mr. Universe Lee Labrada be your personal coach. GO FOR IT! 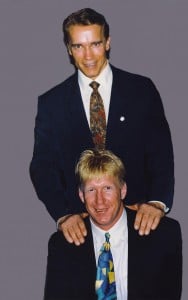 We had a police escort to the city limits of Fort Wayne. We then returned to the Baymont Hotel to rest for the next day’s push. The people were the greatest and inspired me even more to stay motivated and keep on making those revolutions of my wheels across America!

How Do We Stay In Shape? 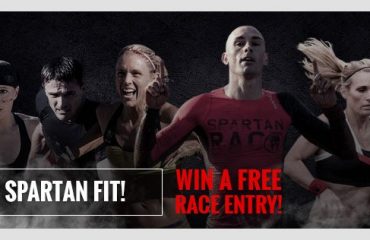 It’s Time to Spartan Up!