A Personal Drive for Athletic Excellence 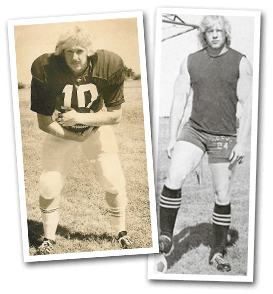 Kevin Saunders spent the first 25 years of his life on his feet. As an athlete, he competed in football, basketball, track & field and baseball in junior high and high school, earning an athletic scholarship to attend college. If the story ended right there, one could say that Kevin had the chance to achieve something few people have the opportunity to accomplish.

After his accident, the doctors and experts that treated Kevin did not expect him to live. He spent some time in a coma and almost a year in the hospital. But he did survive – and even found the courage and determination to thrive. Kevin would have to do so paralyzed from the chest down, and with NO CORE BALANCE, whatsoever. He will be the first to tell you that life in a wheelchair with this level of disability is a thousand times harder than life was on his feet. 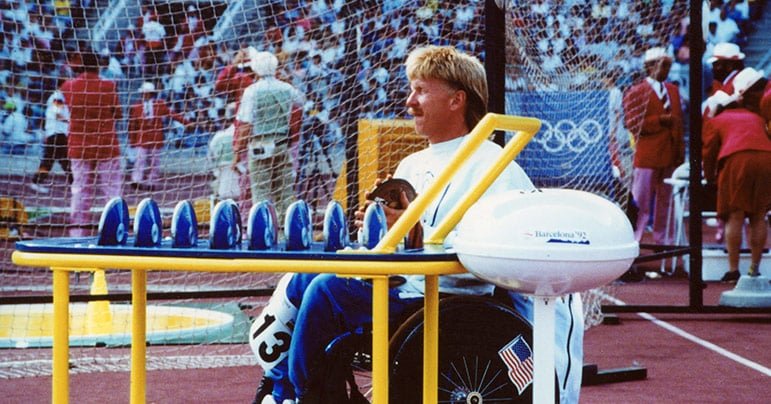 After hearing about wheelchair races and Paralympic Games being held in Olympic Stadiums, Kevin went on to start training for the Paralympic Games in Seoul, South Korea in 1988. Kevin soon found out from his first wheelchair race, playing wheelchair basketball, and even after getting a lightweight racing wheelchair, that accomplishing any level of athletic proficiency with his level of paralysis takes a person with strong faith and a stronger constitution to be able to continue with an active lifestyle. Even since Kevin retired from the elite Paralympic Games competition, he still trains harder than most people and makes a point of pushing his athletic 25 year old training partner, Raymond Herrera, past limitations every single day. Most recently, in January 2014, Kevin Saunders added another championship victory to his long list of athletic accomplishments when he won the Houston Marathon USATF Championship race.

An Advocate for Accessibility

Kevin Saunders has been an advocate of the Americans with Disabilities Act (ADA) since before it was signed into law in 1990 by President George H.W. Bush. He has given hundreds of speeches promoting the importance of accessibility and on the right to work and not be discriminated against because of a person’s disability. Kevin has worked with Senator Bob Dole for over 25 years on disability awareness issues. Senator Dole, a long-time majority leader of the Senate and 1996 Presidential candidate, has been a tireless advocate for the rights of the disabled. It was Senator Dole who helped lead the ADA with the help of disabled individuals like Kevin Saunders, and it was also Senator Dole who helped promote Kevin Saunders to become the first person with a disability in becoming a member of the President’s Council on Physical Fitness & Sports. 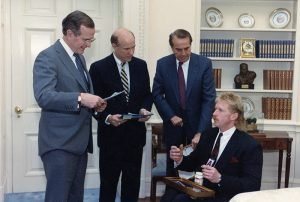 Kevin says, “I was injured on the job as a federal inspector, suffering massive injuries internally and my spine was severed at the T-5 level, leaving me paralyzed from the chest down and confined to a wheelchair for life. My experiences along the way served as tremendous education that has been at the foundation for all my accomplishments – from working with the ADA in the very beginning to becoming a world class athlete. I’ve had the opportunity to contribute to construction designs that work for all and to work with people of all ages with different disabilities. These experiences have all played a huge part in enabling me to see, understand, to push through and know what types of things are necessary and what it truly takes to make accessibility work for everyone.”

The goal we should all aspire to is to allow everyone to enjoy full access to our public spaces. This includes wheelchair athletes like myself, other severely disabled men and women, our able-bodied aging population, those who need scooters for access or other mobility aids – even those people with no physical disability who are enjoying time together with children in strollers or riding along behind their parent’s bicycles. Access should be universal.

Because Kevin is frequently outdoors working out in his wheelchair or hand-cycle, he takes notice of the people enjoying the park spaces and trails. He knows how important it is for anyone to get outdoors from time to time to get some fresh air, to have a stroll, run or bike – just to feel the wind on their faces or hear the sounds of the city or of the natural environment around them. As a whole, however, citizens tend to take public spaces for granted, or they see municipal beautification projects superficially – noticing the visual upgrades and amenities provided, but not always appreciating the principles of accessibility, which are an important part of making these benefits available to all. 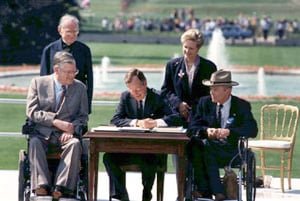 Kevin adds, “Probably one of the most important accomplishments President H.W. Bush made during his Presidency was the passing of the Americans with Disabilities Act (ADA) into law as an extension of the Civil Acts Right.” For Kevin and millions of disabled Americans, the ADA represented a landmark piece of legislation that would bring many improvements in the way they interacted with the built environment. As with any federal legislation, there were immediate benefits, but also areas where the ADA failed to effectively improve conditions as it was meant to. It is for this reason that Kevin continues to work with the City of Houston and other leaders and organizations to make sure that it’s not just the requirements of the ADA – but the core principle of accessibility – that drives the planning, design and construction of new projects.

In addition to his work with the ADA, Kevin has also worked with National Parks and Recreation, the Volksport Association, and with the Houston Commission on Disabilities. He adds, “I just want to be able to help make sure our Houston Parks and Recreation facilities have implemented accessibility for all!”

Book Kevin
Kevin Saunders is widely regarded as one of the most powerful motivational speakers alive today. Faced with severe paralysis, he overcame constant physical pain, overwhelming depression and self-doubt to become a World Champion athlete, author and inspiration to millions around the world – helping them to “Never Give Up!” in pursuit of their goals.

Let Kevin inspire and bring the champion out of every member of your audience.