The “Big Push Across America” 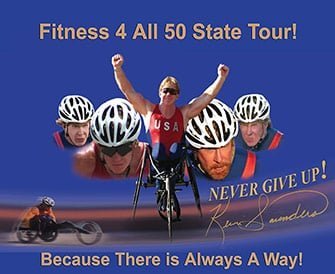 Kevin’s mission in the “Big Push Across America” was to educate our nation’s youth, parents, teachers and the American people about the positive effects of physical fitness and proper nutrition. He wanted to do so in such a way that they would be inspired and become self-motivated to actively make healthier choices, including participating in fitness activities and developing healthy food habits for a lifetime. Kevin Saunders saw firsthand in his own life how fitness and exercise can create a personal revolution. But despite the important work he was involved with as a member of the President’s Council on Physical Fitness & Sports, he realized that many people were still struggling to find healthy options for their own lives. So, to raise awareness of the issue, he did the one thing he knew best – he decided to push forward. From the Canadian border in Michigan to the Mexican Border in Texas, Kevin was on a mission to promote proper health and fitness to the American People. 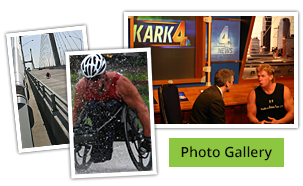 Over a grueling period of several months, Kevin pushed his wheelchair from one end of America to the other, over 2,500 miles, meeting with local officials and families along the way to share his insight on the nation’s health crisis. In one stop after another, in big cities and small towns, he spread hope and advice improving the well-being of communities across the country.

The trip itself was something of an adventure. There were downhill stretches where his racing chair would reach speeds over fifty miles an hour. That might not seem so quick from behind the wheel of a car, but in a wheelchair it feels like one is about to break the speed barrier, especially with eighteen wheelers barreling by, as they often were. As exciting as the fast sections were though, the biggest challenges were the hills and the heat. State roads aren’t designed for people in wheelchairs. Kevin recounts, “It seemed like every time I made my way over some long, gradual incline, it would just level off enough so that I could see another one coming up. This was heading south in the dead of summer, so the waves coming up off the blacktop could burn over 130 degrees. I would curse the heat until I ran into days of rain, pounding down on me so hard that I couldn’t see what was in front of me. Sometimes it was overwhelming, and so I just tried to keep myself motivated and break it down into small stretches.”

“My mission was to help motivate, educate and inspire the American people and to create lasting health and fitness habits.”

At each stop, Kevin conducted a health and fitness summit geared toward the mayor and city council members to share some insight on the epidemic and help gain support for the “Big Push.” To make it to Laredo on time, he needed to push his racing wheelchair or hand-cycle about 50 miles per day via state highways. The purpose of the “Big Push” was to serve as a preamble to the larger, more detailed “Fitness 4 All 50 State Tour,” a nonprofit 501 (c) (3) organization. 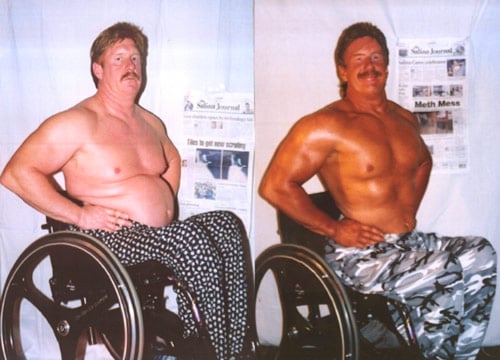 Kevin’s picture before just after he was able to get back in his wheelchair after 6 months of complete bed rest from a bad injury to his ischium on left.
On right a picture after 12 weeks of hard training and eating right as Kevin Saunders won a Labrada Lean body contest his weight dropped from 240 lbs.+ with body fat over 30% to a body weight of 175 lbs with body fat of 12 %. Kevin is completely paralyzed from the chest down confined to a wheelchair with NO CORE Balance!

Proper health and fitness remain at the core of Kevin’s personal mission today.

Kevin says, “Our mission with the ‘Fitness 4 All 50 State Tour’ is to serve as a catalyst to educate and empower our nation’s youth, from grades 3-12. And also to facilitate the work of parents, teachers, administrators, city mayors, community leaders, state leaders – all Americans – to empower them to become self-motivated to utilize the tools and resources at their disposal. One example is the My Healthy Daily Lifestyle Journals we designed to make daily educated healthy decisions, so that making healthier lifestyle choices becomes a way of life.”

“We have partnered with the top fitness and nutritional people in America to accomplish this,” he adds. One of those partners for the “Fitness 4 All 50 State Tour” is the Cooper Institute, founded by Kenneth Cooper M.D., also known as the “Father of Aerobics.”

Kevin’s goal is to cover all 50 states, giving approximately 4,000 presentations to school-age children and an equal number to city and state officials. “We want people interested in living a healthier lifestyle to be able to achieve their goals. We want people to have access to information from the top fitness experts, trainers, and nutritionists, whether they are sitting through a live presentation or following through the media.” There were also a lot of media stops and events. To help get the message out, he was constantly being interviewed on local TV stations, radio stations, and newspapers.

Despite the thousands of interviews and sponsors that the effort generated, however, Kevin’s work still wasn’t done. In an effort to better understand how it became so hard to stay fit in this world, and continue sharing his message of hope and encouragement, Kevin took his tour overseas. By pushing through Europe and meeting with politicians and experts, he was able to gain – and share – a new perspective on what’s happening in America’s grocery stores, restaurants, and dining room tables.

“I greatly respect Kevin Saunders’ commitment to improving the health and well-being of our youth in addition to the character he has displayed in not giving in to his unfortunate handicap.”
Mike Brungardt, Head Strength & Conditioning Coach, San Antonio Spurs

Health and fitness remain at the core of Kevin’s personal mission today. We invite you to contact us with your questions on his fitness related programs, and how they can make a difference in the lives of your audience members.