Kevin had an incredible opportunity to serve as an ambassador and to discuss health and fitness concerns with people from other countries when he embarked on a European Tour. More than that, it made for a wonderful and romantic trip to a new part of the world, not long after Kevin’s marriage to his second wife, Dora. She was a registered nurse that he’d met during his recovery, and they had managed to keep in touch. He found her to be a beautiful, magnificent, and giving woman. He says, “Truly, coming together with her has been a wonderful gift from God, and I was so glad to be able to share the experience with her.” Together, they toured Germany, France, Austria, Italy, and Holland, meeting wonderful people along the way. 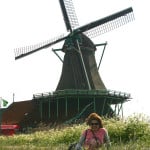 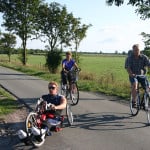 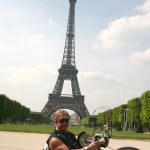 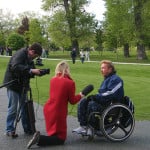 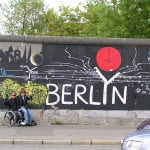 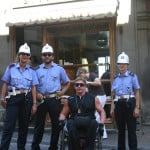 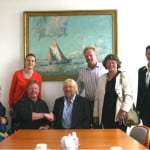 “The actual travel was less frantic than my trip across America had been,” explains Kevin. “I pushed my hand-cycle and Dora rode her bike alongside me through the Netherlands, France, Germany, and Italy. Along the way, we saw sites ranging from the countryside windmills to the Eiffel Tower and the Roman Coliseum. It was like riding through a series of postcards, first in the Alps, then through to the vineyards, followed by beaches, and so on.”

But Kevin and Dora felt that, just as they had experienced in the USA Tour, it was the people they encountered along the way that made it special and unforgettable. “Men and women that we met on the way took us on tours through their hometowns while sharing their concerns about health. Many were concerned about their diets, although they fared far better than we do at home, consuming mostly fresh foods, and living very active lifestyles,” he says. Kevin also noted that when they shared a meal with their European hosts, they preferred small meals. Most also rode bikes and walked for the majority of their travel.

“In Berlin we met the city officials at the Federal Building, and they were very happy we had come to their city,” says Kevin. “The Bergermiester of Norderney (that’s Mayor in America) Klaus-Rudiger Aldegarmann and his council told me their concerns about not wanting to let fast food take a strong foothold in their country, as it had on our side of the Atlantic.” European officials saw the health problems that Americans were experiencing, and wanted to take measures to ensure that their people could continue to enjoy active lives filled with fresh food.

Kevin reflects, “I was inspired by their attitudes. To them, fitness is for everyone, not just those of us competing in sports. They recognize how important it is to stay active by biking, walking or running, as well as choosing fresh, nutritious foods for a healthy successful life.”

Health and fitness remain at the core of Kevin’s personal mission today. We invite you to contact us with your questions on his fitness related programs, and how they can make a difference in the lives of your audience members.
TOP