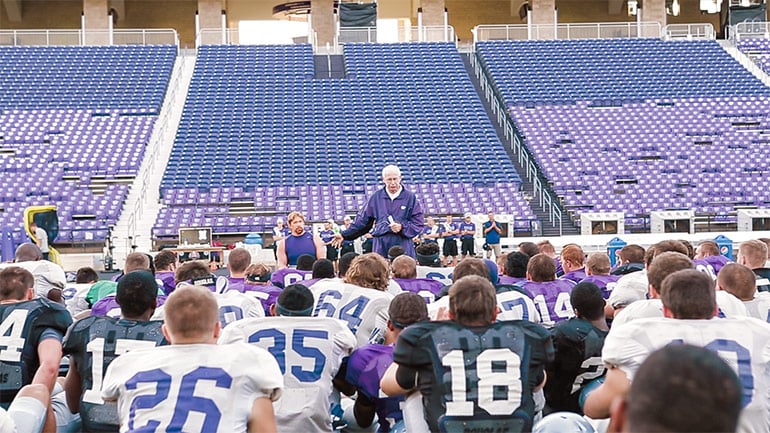 In 2013, Kansas State University picked Kevin Saunders and a handful of other outstanding alumni to represent the University in its “Wildcat Way” campaign. Kevin’s story has been featured in TV, radio, print and online media, and continued into 2014.

In the early nineties, as Kevin was competing in the Paralympic games and other competitions around the world as a wheelchair athlete he started to garner some recognition. However, he noticed that the wheelchairs he was using weren’t always up for what he wanted to do, and other competitors were taking the track in more specialized wheelchairs. To get to the next level in competition, he was going to need something that was stronger, lighter and more agile – but this means something that was not “off-the-shelf.”

Not one to be discouraged, Kevin formulated a plan: “I turned to the only place I could think of – the brilliant engineers at my alma mater, Kansas State University.”

“When President Jon Wefald and V.P. Robert Krause of Kansas State University heard what I had in mind, they immediately agreed to help out,” he continued. “Over the following months, I spent a lot of time on campus talking to engineering students, athletes and professors. More than a few times, people asked me if I’d had a chance to meet Kansas State football Coach Bill Snyder. They said that we had a lot in common and a similar outlook on life.”

A Meeting and a Purpose

Kevin recounts, “They called Coach Snyder to come and meet me. I told him what a fan I was of his work and the Kansas State football program, and he invited me to come and sit on the sidelines for an upcoming game. I couldn’t imagine a better treat. I’d always loved football, playing both offense and defense in high school and offense in college and still followed the college game closely.” 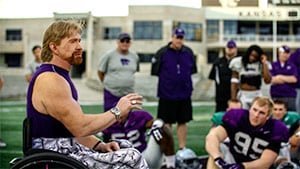 Kevin arrived at the stadium, ready to watch the game and enjoy the game. But, things would take an unexpected twist. He says, “I should have seen what was coming next. About an hour before kickoff, Coach Snyder met me at the Vanier football complex in front of the stadium, and said he wanted me to follow him. I thought we were going to his office or to the field, but instead we made our way around a couple of corners, down a short hallway, and then to an unmarked door in a long hallway. When he opened it, there were over a hundred young players facing us on the other side. Without any hesitation, Coach Snyder brought their attention to us and announced: “You all know who this is because you have already heard me speak about Kevin. Then he said that I would be giving ‘a few words on winning.’ Dozens of eyes turned to me unexpectedly.”

Kevin was totally unprepared, but knew that his story was one that would resonate with the team. He says, “When I’d finished, I looked around the room, meeting their eyes with my own. I told them, ‘The thing that you have to remember, that you always have to carry with you…is that you can never, never, give up believing you can win and finding a way to win. You cannot accept less than 200% from yourselves and your teammates.”

This seemed to strike a chord with the team and they got fired up, taking the field with a renewed purpose. They went on to win that game. “Later, Coach Snyder asked if I’d be interested in staying on as motivational coach for the team,” says Kevin. “I accepted, and worked as the motivational coach with the Kansas State football team from 1991 until 2005, during what’s been referred to as ‘the greatest college football turnaround in history.’ Some of my duties as motivational coach included speaking and working with the team giving inspirational goal-setting talks to help them break barriers, transcend limitations, and reach for new levels of excellence, and achievement.”

While Kevin is shy about claiming any credit for the team’s success, others seem to feel differently. In fact, the grateful players, many of whom have gone on to successful careers in and out of football, even dedicated an annual award in his honor. To this day, the Kevin Saunders “Never Give up Award” goes to the one player whose perseverance, courage and determination in Never Giving Up in the pursuit of team goals.

Past Winners of the Kevin Saunders “Never Give Up” Award

In 2009, Kevin returned to Kansas State Football on a part-time basis, furthering his work with the team. During the 2012 season, Coach Bill Snyder asked Kevin Saunders after his presentation to the football team to come back to be the motivational coach as he had done in the past for the team. Some say this 2012 season for the Kansas State University Wildcats has been the “2nd greatest turnaround in college football history.” Kansas State University finished the regular season with its first ever #1 BCS ranking and an 11-1 regular season and winning the BIG XII Championship. The Wildcats won an Alliance Bowl bid from the Fiesta Bowl.

Book Kevin
Anyone interested in learning about leadership can learn important lessons from what Kevin learned from working with Coach Snyder. Whether you are building a sports team, business these serve as a model for excellence for all groups.