Kevin Saunders was invited back to Corpus Christi, TX, earlier this week to commemorate the 37th anniversary of the public grain elevator explosion that changed his life. It was the largest explosion of its kind in Texas history, and many in the community remember the devastation that killed and injured so many grain elevator employees.

As part of the commemoration, Kevin appeared on several media interviews, including USA Today, Corpus Christi Caller-Times, KIII-TV, and KRIS-TV.

Kevin shares his story of that fateful day when the huge grain elevator he was working at exploded, causing massive loss of life, and almost ending his own. After spending a year in the hospital, Kevin was left paralyzed completely from the chest down.

Kevin was only 23 years old and working as a USDA federal inspector on April 7, 1981. He had conducted a safety inspection the day before the blast occurred.

In an interview with the Corpus Christi Caller-Times, he said, “When I went through the safety check on that Monday, I found the dust collection system wasn’t working. I told my supervisor, and together we reported the failure to the head engineer of the Port of Corpus Christi. After our meeting, he said he would take it back to his bosses to see about fixing the dust collection systems. All of us were aware of the danger of a non-functional dust collection system. While grain itself isn’t explosive, any movement of the grain in the silos creates grain dust, which is a highly flammable when suspended in the air. In fact, grain dust is more explosive than dynamite or gasoline – approaching atomic energy based on the tremendous force created in a grain dust explosion.

“After sharing our findings with his bosses at the Port of Corpus Christi, the Engineer came back later that afternoon with their response. They said they didn’t have the 2 to 3 weeks to shut down the grain elevator to fix the dust collection system, or the $3 million dollars it would take to fix it.”

That inspection should have triggered an immediate shutdown and repairs. Instead, it was ignored with fatal consequences.

With the breakdown of the dust collection system, grain dust continued to build up to highly combustible levels. The very next day, at 3:10pm the elevator exploded when a worker for the Public Grain Elevator opened a can of phostoxin, a fumigant used to kill bugs and insects in grain. All phostoxin containers include a warning label that instructs handlers to “Open containers of metal phosphides in open air only and never in a flammable atmosphere.”

If either the dust collection system had worked, or the employee had opened the can in a safe manner, the explosions through the facility may have been avoided. Instead, it instantly triggered a deadly chain reaction of 12 explosions ripping through the grain elevator with each explosion becoming more powerful. The biggest explosion blew Kevin through the roof of the two-story building he was in. He would fly over 300 feet through the air, landing hard on a concrete parking lot, crashing down on his head and shoulders, crushing the back of his skull and shattering his scapulas.

“Even though my physical injuries didn’t kill me, the emotional trauma almost did,” said Kevin. “I might have never recovered if it hadn’t been for the help of my rugby friends. They pushed me to channel my hurt and frustration with exercise.”

Paralympian Kevin Saunders signed an autograph to “Mission Impossible” star Tom Cruise while working on the 1989 Oliver Stone film “Born on the Fourth of July.” Kevin also became one of the top keynote speakers and motivational coaches across America, with a mastery in topics including peak performance, workplace safety, fitness and education.

(Left) picture like Kevin signed for Tom Cruise, when he asked for Kevin’s autograph. Kevin wrote “GO FOR IT! 110% Then when Kevin asked Tom for his autograph he had his brother who was his assailant at the time and Tom wrote for Kevin GO FOR IT 200%! He later explained to Kevin during shooting of the film he had always wanted to be a great athlete but never reached his goal. So when he got the opportunity to be in a movie he was not going to let success get away from him as an actor. The 200% was Tom’s way of saying “Double Your Efforts” and you’ll be successful!

From there, Saunders launched himself into the world of athletics that he never knew existed.  Like Kevin says: “We always tell our student-athletes at Kansas State football (Big XII) Conference – “That you don’t know, what you don’t know!” Kevin didn’t know anything about wheelchair sports after being an athlete on his feet and then spending almost a year in the hospital recovering from his massive internal and external life threatening injuries. After he first got involved and had some success on the national and international levels, it opened many other doors to find success in his new life – completely paralyzed from the chest down and confined to a wheelchair.

(Left) Kevin throwing the discus in the Paralympic in the Olympic stadium. (Center) Kevin raises his arms in Victory. (Right) One of Kevin’s USA Kappa uniform and a few medals and awards he has won in America and worldwide.

Kevin Saunders was the first person with a disability to be appointed to the President’s Council on Physical Fitness and Kevin also had the honor of serving multiple terms for three US Presidents. 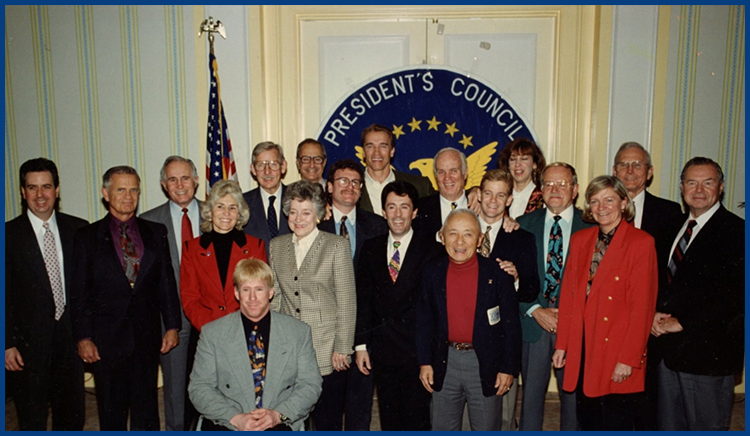 Kevin became life-long friends with former California Governor Arnold Schwarzenegger. Kevin is seated in front and Arnold is standing in the back row and center, in front of the round President’s Council banner.

Kevin also became one of the top keynote motivational and safety speakers, driven by a passion that grew from his desire to help others achieve their goals. Kevin says every anniversary of the Public Grain Elevator Explosion serves as an important reminder of a safety first attitude.

(Left) Kevin speaking to a large audience at a lecture series. (Right) Kevin giving a motivational speech to several thousand people at a conference.

“As a motivational safety speaker, I have the opportunity to speak before some of the largest corporations whose employees work in hazardous environments. I take the specific needs of each audience into account because I have this opportunity to instill the important safety first strategies that must be adhered to at all times.”

In addition to his safety keynote presentations, Kevin is also recognized for his motivational keynote speaking. He’s delivered over 5,000 speeches to corporations, organizations, educational institutions, professional and college athletes, and others. “I always do my very best to meet or surpass my clients’ needs. They have different goals and resources. My story tells them that anything is possible. My strategies help them move the needle forward for real results.” 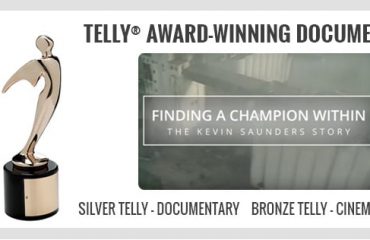 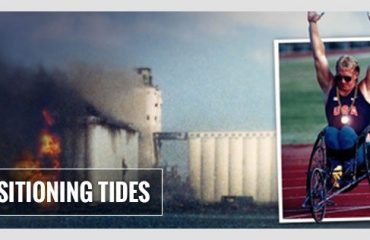 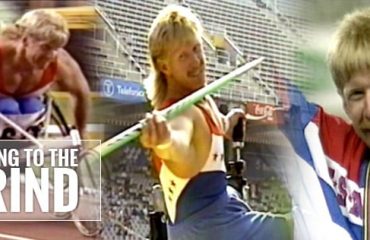 Keeping to the GRIND!