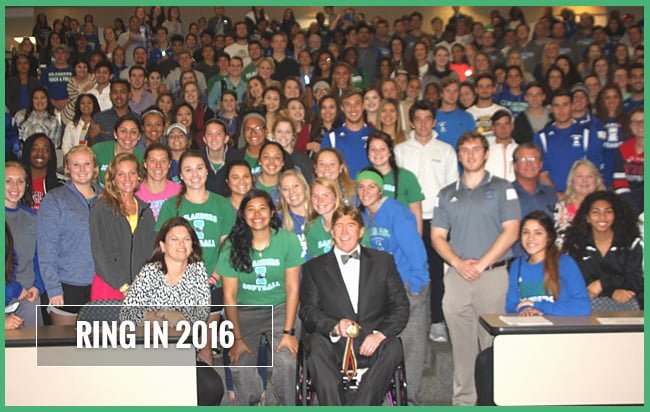 Kevin Saunders, World Paralympic Champion, is pictured with athletes and coaches from Texas A&M Corpus Christi, TX, to help them ring in the NEW YEAR 2016 by “Finding the Champion” within each and every person in attendance.

Orchestrate your own success in the New Year

Last week I was honored to help Texas A&M in Corpus Christi, Texas, kick off their 2016 athletic season by speaking to over 300 student athletes and coaches in a large lecture hall on campus.

The title of my presentation was “Finding the Champion Within”. My goal was to help every student athlete start the New Year by bringing out the Champion within.

I spoke briefly about how sports had played a big part of my life as I grew up as an able-bodied athlete…just like the student athletes I was speaking to. It wasn’t until I had been on the job for a couple of years as a Federal Inspector for the U.S.D.A. that I was injured in one of the worst explosions of its kind in U.S. history.

I shared with them some of the motivational concepts that not only helped me and others recover from our injuries. But beyond that, these principles can help anyone improve every day. They enable you to reach higher goals than ever before in individual and in team sports.

I believe we all need motivation in our lives. Nothing gets accomplished when people are not motivated to do the mental and physical work it takes to get things done. An athlete doesn’t make it to the top unless he or she is motivate. A team won’t see victory and success if the entire team isn’t motivated! 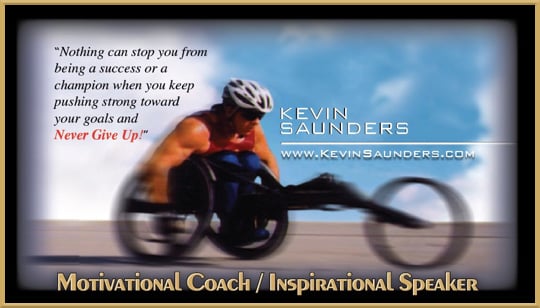 Nothing can stop you from being a Champion when you keep pushing strong towards your goals and NEVER GIVE UP! Kevin Saunders is a Motivational Coach, Inspirational speaker, Safety speaker, Educational speaker and Fitness speaker.

The sports world is great because it doesn’t tolerate weakness. The athletes who succeed aren’t afraid to sweat…to WORK! They make effort, discipline, focus and commitment part of their daily lives to reach new levels of excellence and achievement in their sport.

“If you believe in yourself and have the dedication and pride – and never quit – you’ll be a winner. The price of victory is high, but so are the rewards.”

“You must learn how to hold a team together. You may have to lift some people up, calm others down, until finally they’ve got one heart beat. Then you’ve got yourself a team that has unlimited potential.” 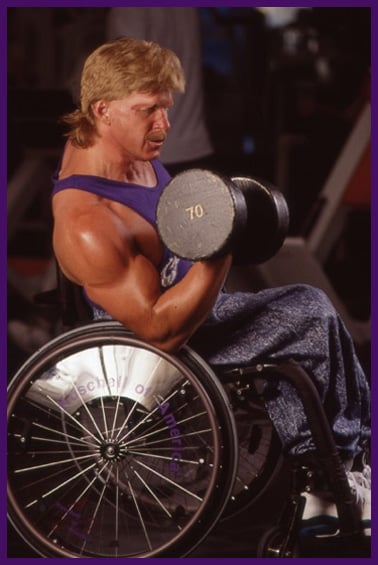 Kevin curling a 70 lb. dumbbell during his weight workouts as a wheelchair athlete. To become a great athlete you can’t give into weakness or sweat – you have to assume responsibility for preparing to win in sports competitions.

Want to be successful? Combine these principles with Coach Snyder’s 16 Wildcat Goals for Success, which helped him orchestrate the “greatest turnaround in college football history”. Your mission should be to make these strategies a lifetime habit of success. You can start by spending a week or two on each goal, applying them in every situation so that they influence your attitude and behavior. Before you know it this habit will be carrying you toward inevitable success. 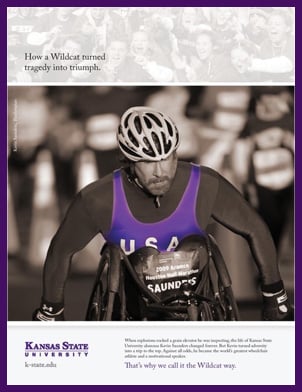 Kevin was selected by Kansas State University as an outstanding alum to represent the university in its “Wildcat Way” campaign throughout print, TV, radio and online media.

The 16 Wildcat Goals for Success

Apply these motivational techniques and Goals for Success, and you, too, will “Find the Champion Within” in the New Year!