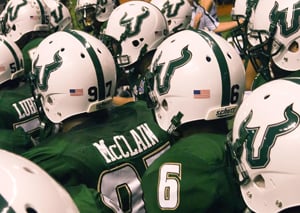 In addition to being a Paralympic wheelchair athlete and author I work as a motivational coach and inspirational speaker. In that role I’ve been invited to speak to the University of Southern Florida Bulls today. Bulls head coach Jim Leavitt and I worked together at Kansas State where he was the co-defensive coordinator while I was the team’s motivational coach. At that time under Coach Bill Snyder’s leadership Kansas State Football experienced what was later referred to as the greatest turnaround in college sports history. Here in Florida Coach Leavitt has created his own amazing story taking this team from non-existence to Division 1-A status in just five short years. Coach Leavitt is truly a man that lives the philosophy of never give up and there’s always a way.

In speaking to the team I’ll do some motivational coaching and try to instill those same beliefs in the players. I think these guys are capable of going all the way and I look forward to speaking with them today. I’ve brought journals for each of the players so they can keep track of their challenges and daily improvements. By writing down their goals and areas they need to improve they will create self accountability and chart a clear path to success. A journal like this is a good idea for anyone. I hope they will learn the importance of improving every day and the need to value the efforts of every individual player in achieving the team’s goals. It’s truly an honor to be asked to speak to this team and the young men just getting started in their adult lives. I know under Coach Leavitt’s guidance and with the help of the whole coaching staff these guys will achieve great success and overcome any obstacle that gets in their way. Well, I’m off to do a little motivational speaking. I’ll let you know how it goes.