Understanding Why GOD calls us for HIS Purpose on Earth

One of your favorite columnists Sandy Nichols is back on the writing Trail again!
I know you’ll enjoy riding along as you read the story!

This is the story of a hero for GOD a young man of peaceful paths of everyday life and how he held fast to GOD during the challenges that face us all during our lifetime. It is the story of a Godly young man who was a lesson in modesty a lesson of having FAITH to turn your life entirely over to Gods hands so that he might mold you by HIS hands for the purpose HE has for you on this Earth. This is a story of a young man that was a lesson of modesty to people of all ages around the world. This is the story of Billy Graham and how he brought so many to know JESUS CHRIST and how GOD works in every man. The Reverend Billy Graham left behind him a memory and legacy of courage, dedication purpose, Faith and Hope for all people of this World that will forever be an inspiration to all men, women and children everywhere in this world! 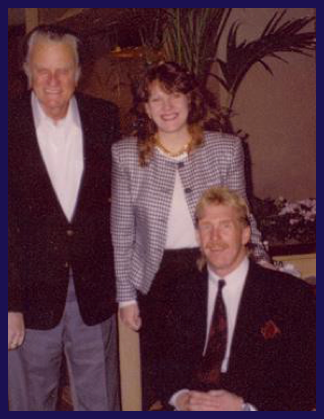 Kevin pictured with the Reverend Billy Graham and a friend from Downs, KS, Miss Leah Buikstra

Below is a letter I received from Rev. Graham after our meeting:

Please forgive the delay I am thanking you for your recent letter to Mr. Graham. He has hardly been home since March, with much of his ministry commitments keeping him out of the country a good part of the year. Mr. Graham wanted me to thank you and apologize that it will be several weeks before he has a chance to return home and answer your letter, so he asked me to write this on his behalf.

Kevin, it was great to speak with you after our meetings with the President Bush while we were in Washington D.C. Tour life can serve as a testament to how GOD works in all our lives if we only let HIM and how JESUS CHRIST uses us to inspire and bring others to HIM.

In your case I have faith GOD saved your life in that terrible explosion for a purpose so that you might carry his message of how GOD works in all our lives if we only accept HIM. In your case he did so for your good but also for the good of all people whose lives you may touch who hear you speak about the miracle GOD has given you to share with others in your life.

Wishing you many blessings in your ministries.

Wishing you many blessings in your ministries, Sincerely yours,

This is the story of what took Kevin Saunders 30 years to truly understand God’s purpose for his life and how the Reverend Billy Graham spent an hour speaking to Kevin in 1990 at age 72 the Rev. Billy still had that deep, resonating commanding voice he used during his crusades to bring millions to know CHRIST around the world. This is the story of how Reverend Billy Graham’s messages resonate with Kevin Saunders and all men. May this story touch your life a special way this holiday season.

In 1949, a bold, dynamic young preacher set out on a journey to bring God to every continent around the world. He was to have an impact on every generation, this is the story of the Reverend Billy Graham and the impact he had on the life of Kevin Saunders.

For more than half a century, Billy Graham spoke to over 250 million people around the world. He spoke passionately wherever he went about the CERTAINTY OF HOPE for every man, woman and child found in JESUS CHRIST. He brought people of all races and denominations together for a common purpose. He lived by faith as he preached in over 185 countries where he adamantly believed that by proclaiming that HOPE was the right of every man and how Jesus Christ belongs to all people in the entire world.

During his lifetime, the Rev. Graham stood beside U.S. presidents as their personal spiritual leader. He counseled them and prayed for and with them.

After Graham’s death on Feb. 21, 2018, at the age of 99, (only months short of being a centenarian) he remains one of the most influential religious leaders in the history of the world. Kevin said: “I got to find out the difference between a living legend in sports a Hall of Famer and a Pro Athlete, but never did I intrude on their time.”

A motivational speaker who also speaks about the importance of education he visits children’s hospitals around the world to remind our youth to Never Give Up on their dreams, Kevin Saunders has met many famous people during his life. He met many of them in the White House while serving on the President’s Council on Physical Fitness, Sports and Nutrition (PCPFSN) under presidents H.W. Bush (#41), Bill Clinton (#42) and George W. Bush (#43).

U.S. presidents pick 20 individuals nationwide to serve on the PCPFSN during their respective terms. Under George W. Bush, Kevin served as a constituent expert for the PCPFSN and as international ambassador. As part of his duties, Kevin pushed his racing wheelchair and hand-cycle through five countries while meeting with foreign government and other fitness and wellness leaders throughout these countries.

Kevin has also met many famous individuals at the Gold’s Gym in Venice, Calif., where he was made a VIP member in 1995. One of his workout partners was Lou Ferrigno and another was Bruce Jenner, before he became Caitlyn.

Kevin says, “I would have lost a million dollars if I’d bet in ‘95 that Decathlete Champion Bruce Jenner would become a woman in his early 60s named Caitlyn Jenner, now. Ha, Ha, who knew?” 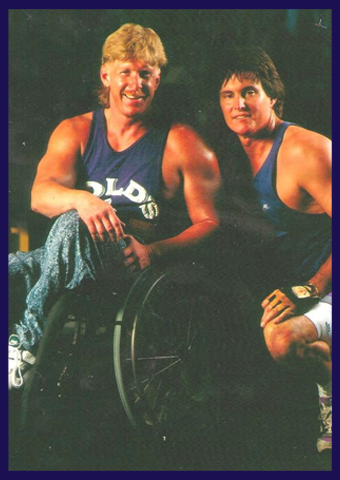 Many of the famous people at the Gold’s Gym would help Kevin by giving him a hand with the weights or with the weight equipment. His only words to them were “Thank you,” for their help.

Kevin also met some of the world’s greatest athletes and coaches during the 25 years he served Kansas State University football thanks to KSU Coach Bill Snyder.

“When it came to other famous people, Kevin met after his accident, he didn’t like bothering them or talking to them because, ‘I figured they had more important things to do than speak to a guy in a wheelchair like me.’”

Steven with his Dad where he went every year for 25 years because Head Coach Bill Snyder invited to come every year! Thanks Coach Snyder for teaching my son Steven and I what it means to be real winners in life we love you Coach! Photo taken by College and NFL Hall of Famer Gary Spani, All-American LB (one of Kevin’s college friends).

All that changed in 1990 when the Rev. Billy Graham stopped Kevin to ask him why he was meeting with President H.W. Bush. In return, Kevin asked the Rev. Graham what he was doing during his visit with the President. The Rev. Graham told Kevin he had been counseling the President and his advisors about the Gulf War.

Rev. Graham spoke to Kevin from the book of Proverbs. He said the passage was for anything pertaining to wisdom and discipline and the Book of Proverbs is to help men to acquire a disciplined and prudent life by doing what is right, just and fair in all situations. It is important our leaders do this to keep good relations with our neighbors around the world.

Kevin said the Rev. Graham also spoke about the US president and how the Chapter of Job speaks to American leaders because God is a big part of what America is as a Free and Sovereign Nation “One nation under GOD, indivisible for liberty and justice for all,” and by allowing them to hear the word of God in their dreams, how to ask questions and, most importantly, how to listen.

Kevin has made friends with many famous people to name a few Arnold Schwarzenegger, Tom Cruise and one of the greatest Olympians of all time, including Carl Lewis the track sprinter from St. Louis, MO. Here’s what Arnold said to Kevin in a recent letter to him. 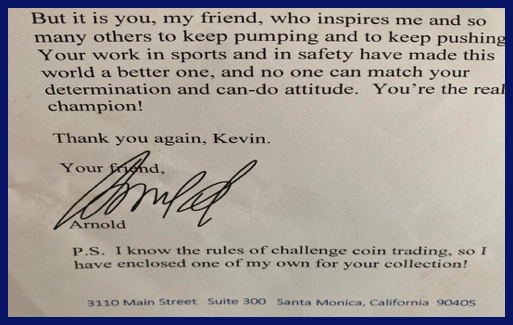 Kevin’s letter from Arnold in 2018. Kevin always wondered why a guy like Arnold Schwarzenegger would want to be friends with a person with a disability paralyzed from the chest down with NO CORE BALANCE like Kevin. 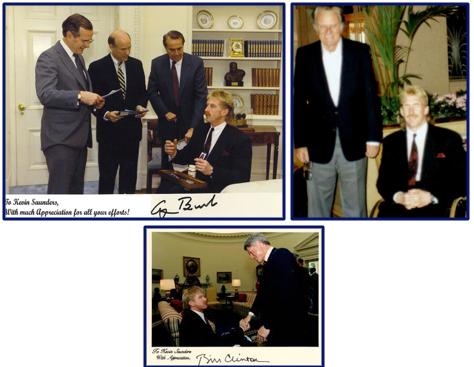 Kevin with the Reverend Billy Graham who spent 45 minutes to an hour with Kevin says he stayed that long because that’s who he was he truly cared about and liked all people. Kevin picture in the Oval Office with Presidents Bush, Clinton during his service to both Presidents as a member of their PCFSN.

Billy told Kevin that he truly believed as long as we as a free nation keep our EYES fixed on GOD and our leaders listen to GOD’S words it will keep our nation safe, free and just for all.

Growing up on a farm in Smith County, Kansas, Kevin had learned at his country church, Rose Valley, from Pastor Stewart that prudence from God meant using good judgment for common sense. These were qualities Kevin thought all farmers used with love and respect to all persons of all denominations.

It took 30 years after meeting and talking with the Rev. Graham, but Kevin finally understood that money is not the important thing. We’re all rich if we have God in our hearts and treat our fellow man the way we would want to be treated. And if we are not doing GOD’s will on earth then whose will are we doing?

Billy Graham asked, “Do you have JESUS CHRIST coursing through our veins? Are we driven by FAITH and HOPE not only for ourselves, but our fellow man? Are we as men able to see inside ourselves and know who we truly serve?

“We have to put God first,” said Kevin. “It’s not always about how much money you have, but if you have clothes on your back, food on your table and your fitness and health, you are rich.”

Hope you had a Merry Christmas and will have a Blessed HAPPY NEW YEAR 2020! 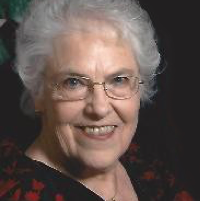 Thanks to our wonderful guest writer Sandy Nichols who many may remember a wonderful columnist for the Osborne County Farmer Newspaper for many years. Her son Dusty Trail as QB led the Osborne Bulldogs to a state football Championship in CLASS 3A in 1983 in the state of Kansas. 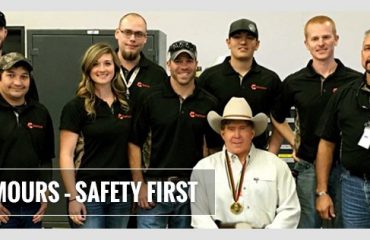 Kevin Saunders spoke to over 250 workers at the Chemours Annual Safety Kickoff!

The Man of Steel – “Wheeled Racer” 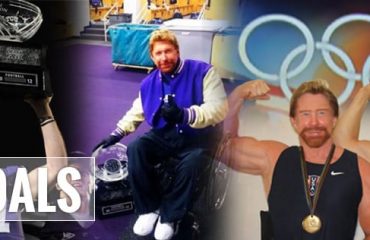 Tired of Not Reaching Your Goals?