“Kevin Saunders is a person that I think can touch any audience. The reason I say that is because he has a story that no one will ever forget, and it’s a true story.”

Kevin believes that the greatest outcome of his success has been having the opportunity to share his story with people of all ages, and to encourage them to reach for higher and greater goals than ever before. He explains, “Maybe the only thing that’s better than winning a gold medal is watching someone that you’ve helped transcend their current limitations reach new levels of excellence.”

For over 25 years, Kevin has spoken to a wide range of audiences, getting as much out of the experience as he puts in. “I’ve had the chance to speak to junior and high schools, colleges, corporations, associations, groups and churches around the country and the world. Some of the groups exceeded 20,000 people, and other times it’s just a small group of less than one hundred. It doesn’t really matter to me how many are there. Each time, it’s a great gift and a humbling honor,” he says. Kevin takes great care in personalizing the presentation to his audience, and the passion and energy that he speaks with infuses his positive message with power. It’s no wonder Kevin has been called one of the “Top 100 Motivational Speakers” working today.

The Making of a Top Motivational Speaker

When asked about when or how Kevin decided to become a motivational speaker, he reflects on the dark days following the grain elevator explosion that paralyzed him. He says, “It goes back to other inspirational speakers that had an impact on my own life. After my accident, I read and listened to some great motivational books and tapes. From reading the works of people like Anthony “Tony” Robbins, Bob Richards, Denis Waitley and Lou Holtz, I started to appreciate that my situation wasn’t the end of the world, and that my responsibility would be to deal with my life in the best way that I could.”

Kevin also found strength and uplifting messages in church services. “It was there that I learned from the writings of King Solomon in the Bible, and especially the scripture that touched my soul: Do not say, ‘why is it that the former days were better than these?’ For it is not from wisdom that you say this.” This powerful and insightful passage spoke to Kevin’s soul, and he describes it “like a wake-up call from God himself.” He continues, “It made me realize that I needed to get over the past and start living for the future.” He would go on to find out that just by making this decision and taking steps to live out his dreams and goals, he was already on the path to a successful and meaningful life.

He acknowledges that the transformation was not an easy one. “Like a lot of paraplegics, I had fallen into the trap of feeling sorry for myself. Dreaming of the past would allow me to escape the painful reality of the present. So my mind was constantly drifting back to those days when I could walk, run, and play sports. With God’s help, I finally recognized that constantly focusing on the past and what I used to be able to do would leave me with little or no opportunities for the present. So I became focused on the present and my future dreams and goals, and realized that it was the only time that I had any power to control or to participate in.”

Kevin says that the final motivation to become a speaker was a natural result of his experience. When he shared his story with others, as happened often, it would resonate with them, whether he was talking to an individual or a small group. “As I had some success early on as a wheelchair athlete, people started taking an interest in my story and they wanted to know how I’d turned things around,” he reflects. “When I told them that I’d gotten to where I was through faith, hard work, and focus, they started inviting me to speak to schools, sports teams, churches, and many other groups.” These informal invitations became more frequent, more organized and Kevin soon found himself presenting to major corporations and government agencies.

Like I said, I don’t know if there’s anything better than helping others by sharing my as well as other successful people’s experiences so that a person can use those examples and turn them into their own successes.

Kevin has many great memories from a motivational speaking career that has spanned over two decades. From these speaking engagements, there are several that occupy a special place in his heart. He says, “One that I’ll always remember was at a talk I was giving called Breaking Barriers and Transcending Limitations at a high school in Nebraska. I love speaking at schools. Students are some of the best audiences, and I feel it’s important to encourage kids to stay in school and get the best education possible.”

Following his speech, he stayed on to sign autographs for a few minutes. “After the kids were dismissed, a young man approached me from the audience,” says Kevin. “He told me that he had been planning to drop out of school the next day. His reason was the same one that we all have when we give up: It was just too hard. But, after hearing what I’d gone through, he said he was going to give it one last shot. He figured that if I could come back from what I’d been through, then maybe it wasn’t over for him, either. I told him to GO FOR IT! – to reach for his dreams and goals with everything he had and to Never Give Up! – and to keep in touch.” 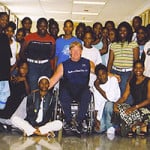 This high school student would prove to do both of those things. Kevin says, “Not only did he go on to finish high school, but he also graduated from college and is now a successful business owner and a leader in his community. Of course, he had to do all of the hard work to make that happen, but I’m still overjoyed when I think of the small part that I played in his success. He and I still talk from time to time, and every time it is a wonderful reminder that we can make a difference in this world.” 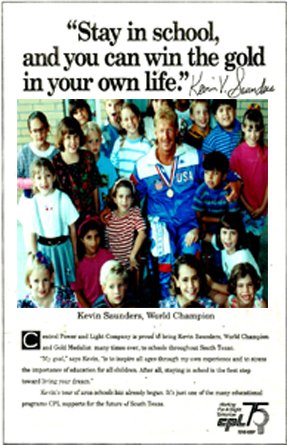 Another key moment for Kevin came from a corporate motivational speaking presentation he delivered to Southwestern Bell Corporation (SBC-AT&T).

“Bret Shugarts, Manager of the Yellow Pages division, wanted me to challenge his sales team to go out there and sell the biggest book in company history,” he explains (the size of the directory is determined by the number of paid listings the sales team can close). “He had set the bar pretty high, so during my Peak Performance Seminars, I asked each sales person to tell me what they’d have to produce to make it happen.”

Kevin gave them all a chance to respond, then worked with each sales rep individually. In the one-on-one sessions, he challenged them to increase their personal goals, going beyond the sales target they had already quoted. Kevin shares, “It was a huge office, but I met with every single one of them, until each had given me a business card with their new goal on the back. I also gave each person a copy, and I added a 10% increase to their total projections for this particular canvas period for their yellow pages.”

Alongside the new goal figure, Kevin wrote: “GO FOR THE GOLD! – If It Is To Be – It’s Up To Me!” Kevin knew that their vision for what was possible was already expanding as a result of their experiences during the Peak Performance Seminar. He says, “By aligning their mind, body and spirit they could break through their barriers. They might have to refuse choosing the path of least resistance, and instead choose to swim against the current, but it’s all done in pursuit of their biggest goal ever, and that got them fired up to make the commitment and see it through to the end.”

Kevin was optimistic about the work they had all done together in setting these unprecedented goals, and was interested in how the team would perform in meeting this challenge. He recounts, “From time to time, I followed up on them individually, telephoning each and every one of them to make sure they were on track to hit their goal during the sales canvas. It was hard work for all of us, but it was worth it. Every last producer hit their goals – with the majority of them surpassing the sales targets we had written down that day. The excitement in the office was palpable. Not only did they set new records for themselves and their company, but many of them won vacations and other incentive gifts for selling the biggest Yellow Pages book in SBC company history.”

“You have to fight for everything and be willing to work hard, never quitting.”

“I couldn’t overstate what a joy that was for me,” he says. “It was great fun and an honor to be a part of their win. They all had it in them; they just needed a nudge in the right direction. From there, it was just a matter of doing some one-on-one motivation, a skill I learned from working with elite athletes and top-tier sports teams.” Kevin believes that there is no better parallel for the business world than sports, since everything has to be earned. “In sports, nothing is given to you,” he likes to remind audiences. “You have to fight for everything and be willing to work hard, never quitting.” However, Kevin knows that these lessons aren’t limited to the playing field or the board room – they are life lessons that make the difference between the extremes of fear, doubt and failure, or the opposite end of the spectrum: purpose, confidence and success.

Kevin continues to speak to all types of audiences, and has enjoyed continued success – professionally and through the success of the business and athletic teams he has spoken to. As a graduate of Kansas State University, he was thrilled to meet Head Coach Bill Snyder in 1991. That meeting led to an invitation from Coach Snyder for Kevin to serve as the K-State Wildcats’ motivational speaker. Kevin worked with the team from 1991-2005, during which Kansas State transformed its football program in what is regarded as “the greatest college football turnaround in history.” During that period, the Wildcats won several conference championships and bowl appearances. Coach Snyder asked Kevin to return as motivational speaker in 2009, and the Wildcats have risen to the occasion once again – hailed now as “the second greatest college football turnaround in history.”

It’s that dedication to results and success that have earned Kevin a distinction as one of the Top 100 Motivational Speakers, and a reason why he feels like he’s just getting started. He’s thrilled at the opportunity to meet people around the world who have challenges to overcome. For Kevin, these challenges are much more than a “puzzle” to solve, they are lives and dreams that are ready to be unleashed with the right inspiration and guidance.

Book Kevin
Kevin Saunders is widely regarded as one of the most powerful motivational speakers alive today. Faced with severe paralysis, he overcame constant physical pain, overwhelming depression and self-doubt to become a World Champion athlete, author and inspiration to millions around the world – helping them to “Never Give Up!” in pursuit of their goals.

Are you ready to “Go for the Gold?”